The race is put on by FrontRunners, a local Victoria running store. They have a great system set up and RaceDay Timing Services have organized the chip timing in the race.  The combination of both companies organizing the race keeps the most fluid and efficient coordination. I enjoy when both these companies come together.

The Hatley Castle is a legendary location for a race, not to mention a National historic site and  BC heritage building. The Castle was commissioned by the Dunsmuir family in 1908, James Dunsmuir was one-time BC Premier and also BC lieutenant governor, in addition to being a wealthy coal industrialist. The castle was purchased from the family in 1939 and has been a military college and now, starting in 1995, as Royal Roads University. A truly beautiful campus in a castle, ocean front and surrounded by huge Douglas fir trees and a temperate rainforest. 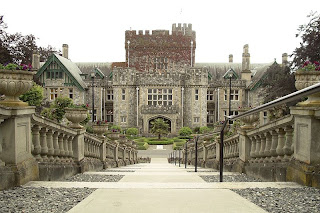 The Hatley Castle 8km race has by far the most hills of the Island race series. I don't know the overall elevation change, but as you can see below, it has significant hills (for a road-race) from sea-level to the top of the ridge.  My plan was to pace easy into the first 5km which was well into the top of the biggest hills and then rip the last 3km.  It worked out for the most part, but it is hard to reign it in when runners are passing on the uphill!
If you see in the map below it is somewhat like a large rectangle, but in actual fact it seems nothing like it.  I found the last 2km on the double track trails very relaxing and like a mountain path.  I ended up fighting for 2nd place at the end but first place (Geoff Martinson) was more than 90 seconds out in front. A great race! 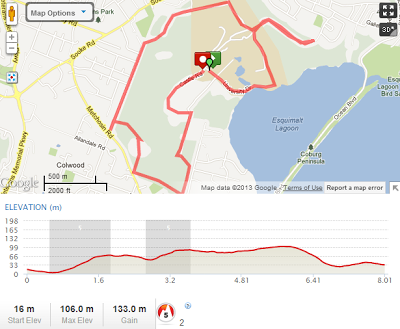 Posted by davinge at 7:55 AM No comments:

The hunt for the Kludahk Trail 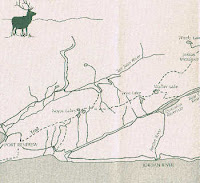 Where is it? And why is it so damn hard to find maps for it?

We spent the extra day off this weekend looking for the infamous Kludahk Trail: a 48 km trail that runs along the ridge above Jordan River between Port Renfrew and Sooke. We had little information to go on as the trail that is on public land has no free-access maps online.  So, a little guesswork from the map to the left, and a bit of Google Maps tracking we set out on our way. I'm sure that's what found you here!

I selected an access point just past Jordan River, ~20km from Sooke. I picked up a logging road and headed North into the woods picking spur roads with the freedom of flipping a coin. We ended up climbing into the snow about 4km off the West Coast Rd. We landed on an assess point for a wide trail heading NW and we decided to take a gamble and climb the mountain.

The pictures below summarize the trail: Snow with crossed with downed Alders. Probably an old logging road with a gentle grade but very ingrown with shrubbery. 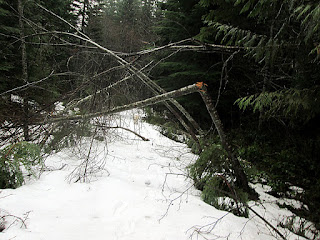 The trail that we found is (roughly) shown below. I took the second road just after Jordan River heading up into the hills above the ocean. First there are a few km of clear-cut logging blocks but then the forest creeps back in. It is so thick that it would be very difficult to bush wack your way through. An old logging trail is the perfect access point. After some careful map perusing we realized we were not on the Kludahk trail.  The actual trail is up higher above the ridge near the lake system that is another 10km+ up the road, or starting in Port Renfrew. 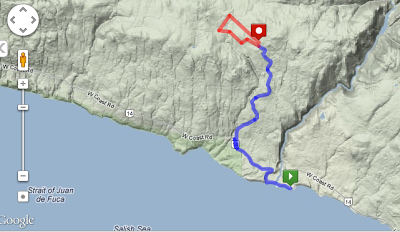 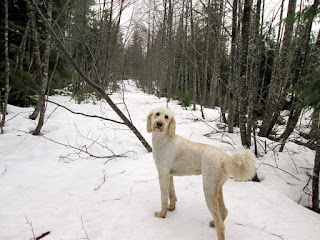 After a bit more research, it turns out you can buy maps from the Kludahk Trail Outdoors Club. 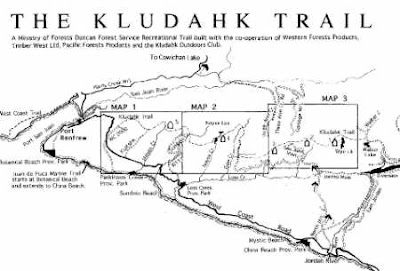